Now here's a stool dating back to 1600 BC, from the 17th Dynasty. The wooden frame is tamarisk, and the seat is woven from rush. It's about 13cm high. That might seem quite low to us, who are used to much taller seats, but in ancient Egypt people were accustomed to sitting on the ground most of the time, so even a little stool like this would elevate you above everyone else. 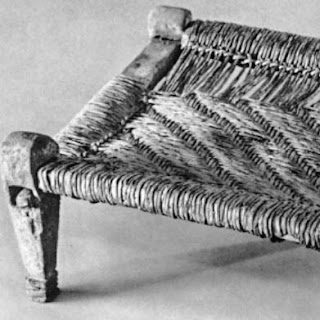 It seems to be quite a common pattern among seats of that vintage. So far as I can make out, the rush isn't twisted the way we'd twist rush for modern seats in the traditional rush pattern,  but it must be twisted a bit, in order to create those long fine strands.

The rush is wrapped around the frame, and then looped back over itself (  See the stool I recently did  with cord, which is looped in a similar way. ) This creates a single-layer seat, unlike the stools we commonly make nowadays where we wrap the cord all the way round, underneath the seat, making an upper and lower layer (which takes more work, and requires more material!)

The other thing I notice is that there  don't seem to be any intermediate, short wraps round the frame in between the strands strands that cross the seat. (Though it's difficult to make out in this rather small photo. There might be single wraps in between.)

It's a simple, but pleasing pattern, and I may try it with fine, ready-twisted rush on one of our 12-inch stools. Actually working the pattern would make it easier to see what the original seatweavers did.

But.... Isn't it wonderful to see such well preserved furniture from 3½ thousand years ago?  The dry conditions in Egypt helped to preserve such things of course, but I'm pretty sure our own ancestors weren't making pretty furniture back then.

Below is my take on the pattern. I haven't bothered to draw it all the way across the stool, but you can what I've done. Does it need intermediate wraps? I think it probably does, otherwise the loops would interfere with each other. Watch this space: I'll show you my experiments when I try to do it myself. 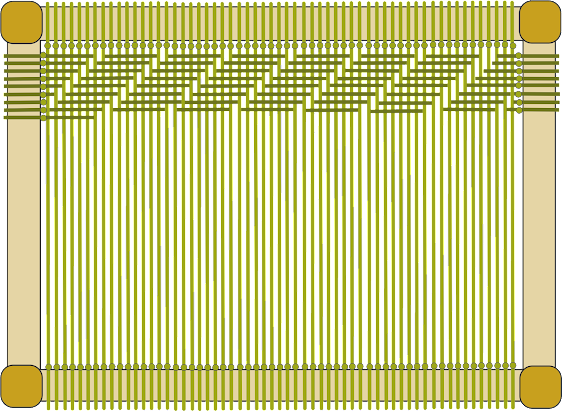