This customer had a long footstool, of the same construction as a typical seagrass stool, except that it's three times as long. At some point in its history, a previous owner had had it upholstered with a padded seat, and elaborate piping round the edges. It must have looked amazing when it was newly done, but the fabric was worn and dirty, and urgently needed a new lease of life. Mrs S just wanted it looking decent again so that she could put her feet up on it.
I suggested that it might be better to re-do it with a woven seat, which would be better suited to that sort of frame, and she agreed with me.
I started stripping off the upholstery, which took AGES, as there were so many nails embedded in the hard wood of the frame. I also discovered that the side bars of the frame were badly warped. It seems the weight of the upholstery, and many years of it being sat on, had caused the side bars to twist. A stool of that length really needs a stabilising bar of wood in the middle, to keep it straight, but such a thing was missing here. You can see the result quite clearly in the photo below.

I removed the rest of the webbing and nails, and had a look at the side bars, which were impossible to unbend. Mrs S thought it would be perfectly fine just to leave them warped, if it was possible to weave a pattern over them, so I just twisted them back,  glued them in place, and added a stabilising bar in the centre. 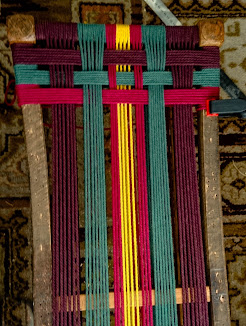 Mrs S rather bravely left it to me to decide on the pattern. She wanted mainly darker colours that wouldn't show the dirt (as it's used as a footstool) so I picked out some nice warm dark colours of cotton cord, with a flash of yellow to make things stand out. I started off with a pattern I'd designed on paper, but soon realised it was too elaborate and ended up just making it up as I went along.
In the photo on the left you can see the warp strands in place, and the start of the weaving of the weft strands. The stabilising bar across the centre is visible at the bottom of the photo. Notice the plastic clamp, holding the cord in position, top right. These things are invaluable for seatweavers!
In order to keep the pattern symmetrical, I worked it from both ends at once, working gradually towards the middle. It was a lot of fun to do, with a few head-scratching moments! 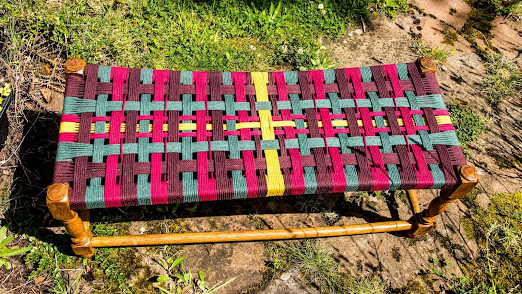 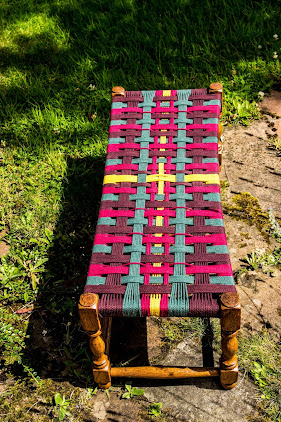 You can buy this type of cotton cord from our website  HERE. The colours used were Burgundy, Dark Brown, Moss Green, and yellow.
You can buy the SitUpon Seats Stool Book HERE. This particular pattern isn't in it, but a number of other patterns are, and if anyone particularly wants this pattern I'll draw it up and add it to the book. (All our instruction books are written, illustrated, printed and bound by me, Ally McGurk, at SitUpon Seats. They are not currently available from bookshops.)
Posted by ally mcgurk at 12:17 No comments: