When I first came across Kraft paper rush, I was a bit suspicious, as I felt it couldn't possibly be a substitute for "the real thing."

Well, certainly it's not made from the leaves or stems of a plant, so it's not truly "rush", but it makes a very good attempt at looking like the genuine article. And it's so easy to use!

An antique chair certainly deserves real, hand-twisted English rush, harvested the same year from the Thames or other southern English rivers. But it's expensive, difficult to get hold of, and even more difficult to learn the correct technique, which involves soaking the rushes overnight, selecting the right rushes as you go, and twisting and pulling them as you work.

If yours is a straightforward, workaday chair, that needs to withstand children, and real life, you're as well to go for paper rush. It looks great; it's hardwearing, and can be coated with clear varnish to protect it from spills; and it's easy to use.

SitUpon Seats stock a variety of colours, which you can see on our main website here: paper rush.

From time to time we get new colours. We've recently taken delivery of a lovely pale shade, which I'm calling BLONDE. It will work really well in cool, modern interiors.

If you haven't used rush before, our instruction books show you everything you need to know, with loads of photos and diagrams to help you along the way. You can find these on our website here: Instruction manuals - look for the one called The SitUpon Rush Pattern Book.

When we first set up in business here in Cumbria I was making bags under the name of The Great Cumberland Bag Folk. (I really wanted to call it The Cumberland Bag Lady but was dissuaded from using that title.)

These are great bags. They're mostly patchwork, and made from upcycled fabrics, often pieces left over from upholstery or curtain making, or pages from redundant sample books.

Each one is unique, though there's a consistency about the patterns. Most have two shoulder straps, so can be considered as feminine backpacks, if you like.

Anyway, I don't really make many bags these days, apart from one-off projects if I need a container for a particular item. (I made a Kindle case recently, for instance.) There was a boxful of bags hidden away in our storeroom, which has found its way to the top of the pile, and with Christmas on its way, it seemed like a good time to try to find good homes for them. 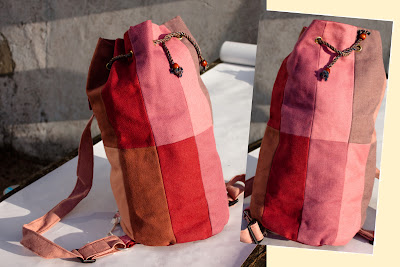 The one in the photo above is the last one left from a series made from heavyweight linen fabric, fully lined. This was probably our most popular style.

So I'm in the midst of adding these bags to our website. So far, I've made a page for them, but haven't added all the links from the other pages yet, so now is your chance to grab one before anyone else knows they're there.

Did I mention they make great Christmas presents? Each one is unique!

You can find them by clicking on this link: http://www.marshallmcgurk.com/SitUponShop/shop_bags.htm

Oh, and I forgot to mention - if you live near us, you can save on postage. Just let me know which one you'd like, and I'll put it aside until we see each other.
Posted by ally mcgurk at 16:43 No comments: 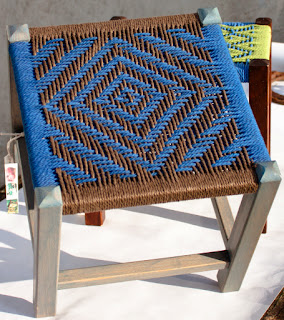 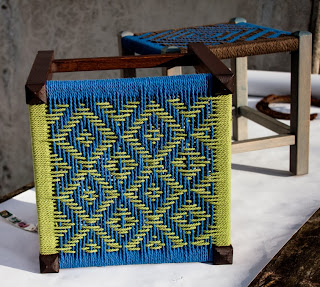 I used to make a lot of these stools, using the beautifully coloured cotton seating cord that we used to stock, but is no longer made. I still feel sad when I look in the box where I used to store it - odd bits and pieces of gorgeous coloured cord are still there, reminding me of what we once could get. There's probably enough for me to do 2 or 3 more stools, though they might be rather strange colour combinations. There's rather a lot of yellow, I think.

Anyway, two ready-made stools, which I made some time back, have just resurfaced. I really like them. They're both woven in patterns I created myself. I almost want to keep them, but that would be silly.

The one on the left has its frame finished in a cool blue/silver stain, which complements the blue and brown seat rather nicely.

The one on the right has a dark stained and varnished frame.

Please note that colours look different on everyone's computer screen. These photos are just to give you an idea of the colours. They probably look a little different in real life.

If I were making a new one today, the cost would be about £75, but I'm prepared to let these two go to good homes for only £59.99 each (plus postage).

I haven't put them up on the website yet, but if you want to grab one before they go public, just make a comment below and I'll get in touch.
Posted by ally mcgurk at 12:55 No comments:

I've just finished a set of 8 new drop-in rush seats for a furniture maker. Looks straightforward enough until you consider how to make the rush go all the way to the corners, as there are no corner posts in these seats. There's a whole lot of secret stuff going on inside the weave. I'm considering writing it up as an extra chapter for our SitUpon Rush Pattern Book. 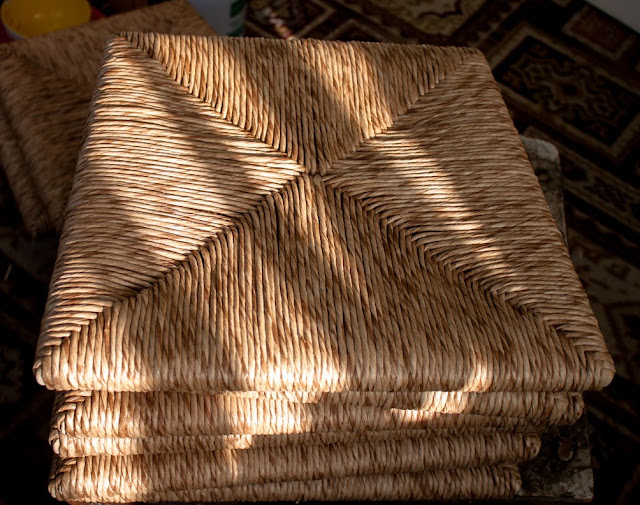 I thought it was about time that SitUpon Seats had a place where our customers, friends, students and others could interact with us and with each other.

I'd particularly like to welcome my new friends from Marlborough College Summer School, who were such amazing and excellent students. 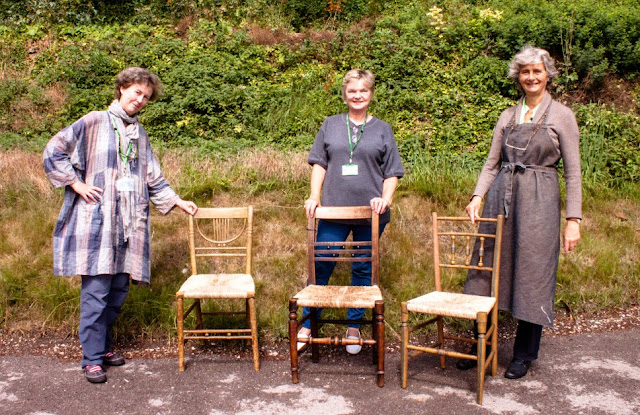 I was amazed at how quickly they worked. Within the second day, we already had three rush chairs completed. 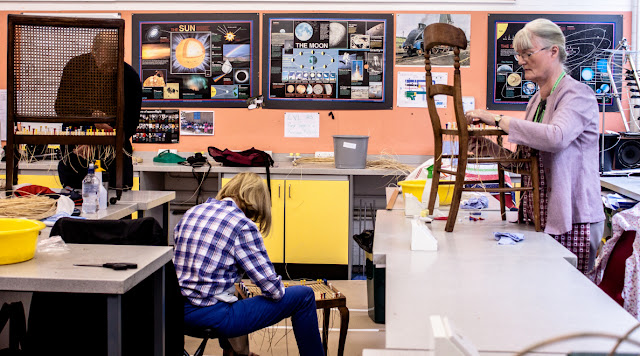 We made our home in one of the college's science labs - a strange place to do craft work, but everyone soon settled down quite happily. 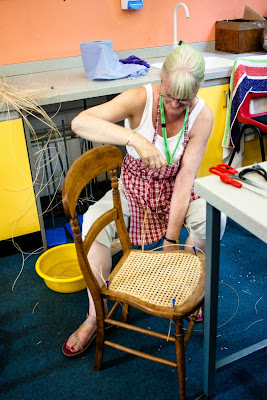 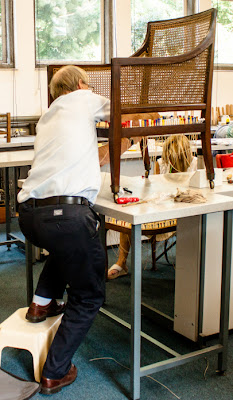 Each of the six students had something different to work on, which was great, as everyone could learn something from each other's projects. On the left we see the final stages of a cane bedroom chair, as the beading cane is being attached, and on the right, a big bergère chair. Fortunately only the seat needed recaning. 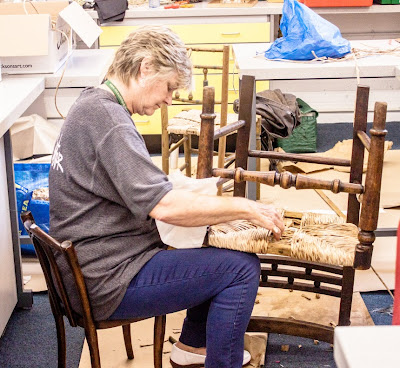 Three people had rush chairs to work on.

The seats have to be packed with paper from below, to keep them firm. 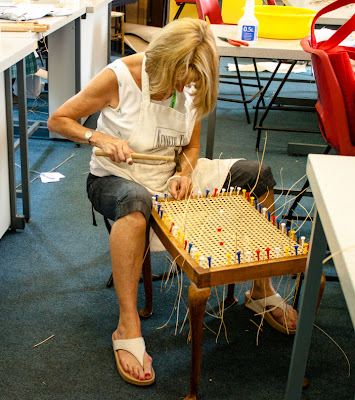 Here we can see a cane stool with a gently curved seat in the process of having its pegs hammered in. With a curved seat, you have to lay down the first horizontals and second verticals from below, in order to preserve the curve. 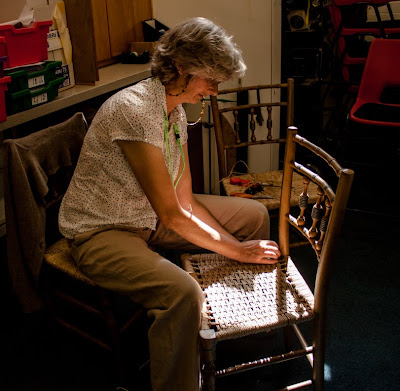 On the left you can see a rather different project - a chair which was originally designed for a rush seat having a seat made from Danish cord.

Danish cord is an incredibly versatile material, often overlooked by seatweavers who assume it's only suitable for the Scandinavian chairs for which it was originally created. 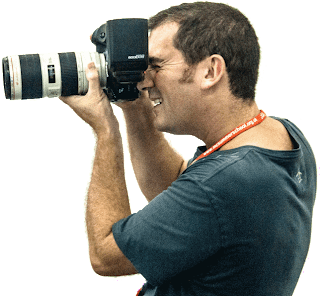 The official college photographer came round to  take photos of our students at work, so I thought it only fair to take a photo of the photographer at work, too. 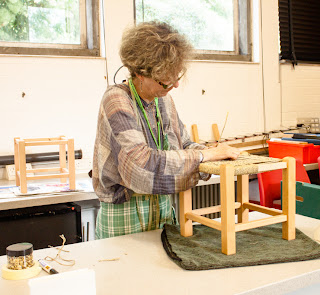 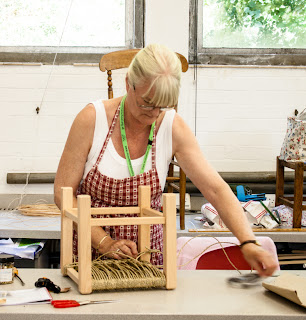 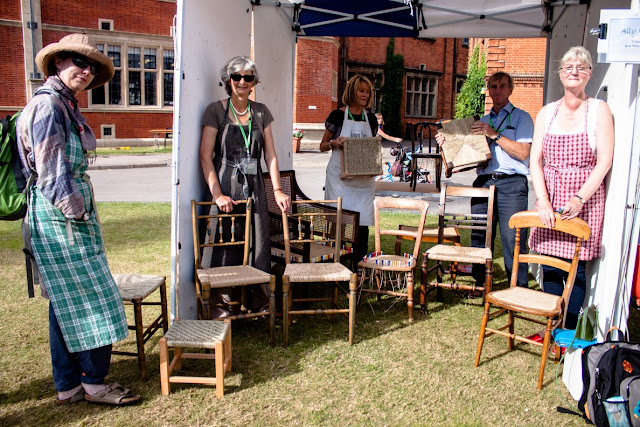 At the end of the week we were able to display all our hard work for the rest of the world to see. I was incredibly impressed by how much these six people, who had never done any seatweaving before, had achieved in just 5 days. I hope they continue to do more in the future.

It was a pleasure working with you guys. Please log in and say "hello"!